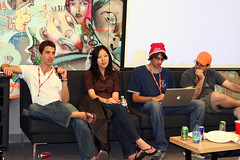 Facebook has been the hot networking site for quite some time now. Founded in 2004 by a teenager, this same teenager, Mark Zuckerberg, is now 23, has no degree, and is about 2300 times richer than I will ever be. (No, I am not bitter.)

Some colleagues asked me to join facebook today. My friends from MyDYO Inc. are there too. So I joined. Here are my impressions.