Though it is not yet widespread, I encounter more and more people who seem to believe that there is growing unemployment, or falling labor participation rate, due to technology.

It is true that technology has impacted the job market. Simply put, back in 1900, everyone was a farmer. Almost the opposite is true today. And that’s entirely due to technology.

However, some people seem to think that a large fraction of the population cannot find jobs that pay enough to get out of bed because of our ever-increasing reliance on computers.

It is important to set the frame of reference. If we think that computers are having a big effect on employment, it makes no sense to start our analysis 50 years go. Let us narrow it down to the last ten years. After all, it has been a technologically intense ten years. Recall that ten years ago, we did not have the iPhone, YouTube was an ugly site with much smaller traffic, cloud computing did not exist. And so forth.

Being Canadian, I am going to focus on Canada. What? You object that you do not care about Canada? Well. Consider this: the computer revolution is an international phenomenon. Thus, if computers are wiping out jobs in, say, the United States, they should also wipe out jobs in Canada, France, Germany and so forth. After all, we all use the same computers.

There is a nice analysis by Jansen, an economist of the Royal Bank of Canada. He does observe that there has been a decline in the labor participation rate of about 2% during the last ten years, in Canada.

“Ah! Maybe that’s because of the computers!”

I should point out that this decline occurred in Canada, but not in other technologically advanced nations like Germany (where they have more robots than Canada). But I said I’d focus on Canada… 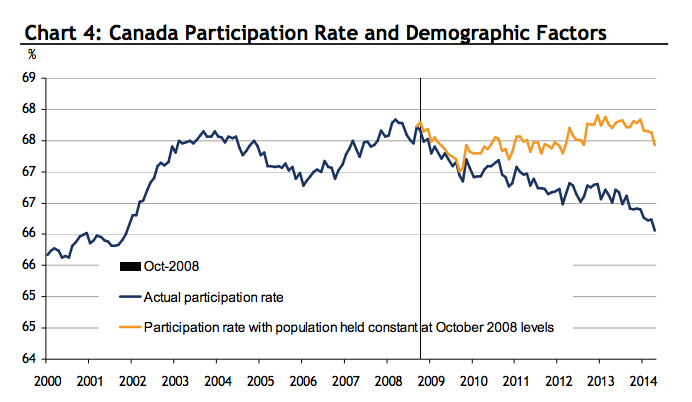 I have a more detailed and international analysis if you do not believe this simple analysis.

The facts simply do not fit the theory that computers and robots are wiping out jobs.

3 thoughts on “Robots have not yet stolen our jobs”