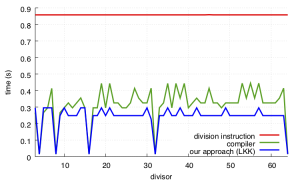 47 thoughts on “Faster remainders when the divisor is a constant: beating compilers and libdivide”