When thinking about “parallelism”, most programmers think about having multiple processors. However, even a single core in a modern processor has plenty of parallelism. It can execute many instructions per cycle and, importantly, it can issue multiple memory requests concurrently.

To demonstrate, let me use a memory access test.

How has this evolved over time? The very latest Intel processors (e.g., Cannon Lake), can sustain more than 20 memory requests at any one time. It is about twice what the prior generation (Skylake) could do. How do the latest AMD processor fare? About the same. They can sustain nearly 20 concurrent memory requests at any one time. AMD does not quite scale as well as Intel, but it is close. In these tests, I am hitting RAM: the array is larger than the CPU cache. I am also using huge pages. 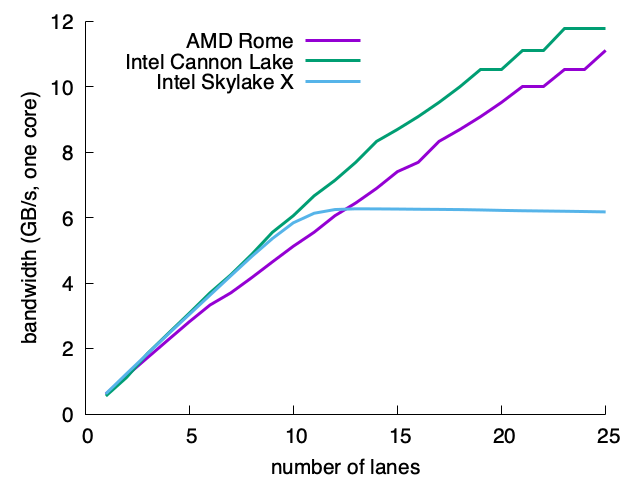 The important lesson is that if you are thinking about your computer as a sequential machine, you can be dramatically wrong, even if you are just using one core.

And there are direct consequences. It appears that many technical interviews for engineering positions have to do with linked lists. In a linked list, you access the element of a list one by one, as the location of the next entry is always coded in the current entry and nowhere else. Obviously, it is a potential problem performance-wise because it makes it hard to exploit memory-level parallelism. And the larger your list, the more recent your processor, the worse it gets.

I make the raw results available. I use the testingmlp software package.