Last year (2019), we released the simjson library. It is a C++ library available under a liberal license (Apache) that can parse JSON documents very fast. How fast? We reach and exceed 3 gigabytes per second in many instances. It can also parse millions of small JSON documents per second.

The new version is much faster. How much faster? Last year, we could parse a file like simdjson at a speed of 2.0 GB/s, and then we reached 2.2 GB/s. We are now reaching 2.5 GB/s. Why go so fast? In comparison, a fast disk can reach  5 GB/s and the best network adapters are even faster.

The following plot presents the 2020 simdjson library (version 0.3) compared with the fastest standard compliant C++ JSON parsers (RapidJSON and sajson). It ran on a single Intel Skylake core, and the code was compiled with the GNU GCC 9 compiler. All tests are reproducible using Docker containers. 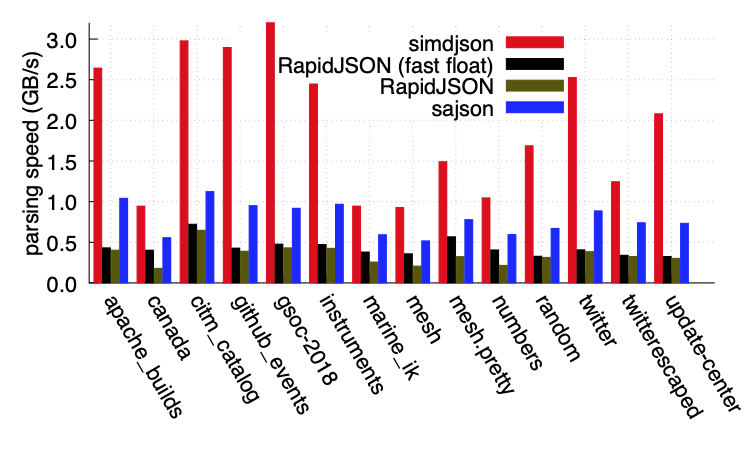 In this plot, RapidJSON and simjson have exact number parsing, while RapidJSON (fast float) and sajson use approximate number parsing. Furthermore, sajson has only partial unicode validation whereas other parsers offer exact encoding (UTF8) validation.

If we only improved the performance, it would already be amazing. But our new release pack a whole lot of improvements:

Credit: many people contributed to simdjson, but John Keiser played a substantial role worthy of mention.

30 thoughts on “We released simdjson 0.3: the fastest JSON parser in the world is even better!”