If the classrooms contain a variable number of students, you cannot just pick classrooms at random. If you do so, students in classrooms with lots of students are going to be less likely to be picked.

Importantly, the problem is dynamic: the number of students in each classroom is not fixed. You cannot simply precompute some kind of map once and for all.

Can you do better than the naive algorithm? I can craft a “logarithmic” algorithm, one where the number of operations you do is the logarithm of the number of classrooms. I believe that my algorithm is efficient in practice.

So divide your classrooms into two sets of classrooms of size R and S so that R + S = N. Pick an integer in [0,N). If it is smaller than R, decrement R and pick a buffer in the corresponding set. If it is larger than or equal to R, then go with the other set of buffers. So we have reduced the size of the problem in two. We can repeat the same trick recursively. Divide the two subsets of classrooms and so forth. Instead of merely maintaining the total number of students in all of the classrooms, you keep track of the counts in a tree-like manner. 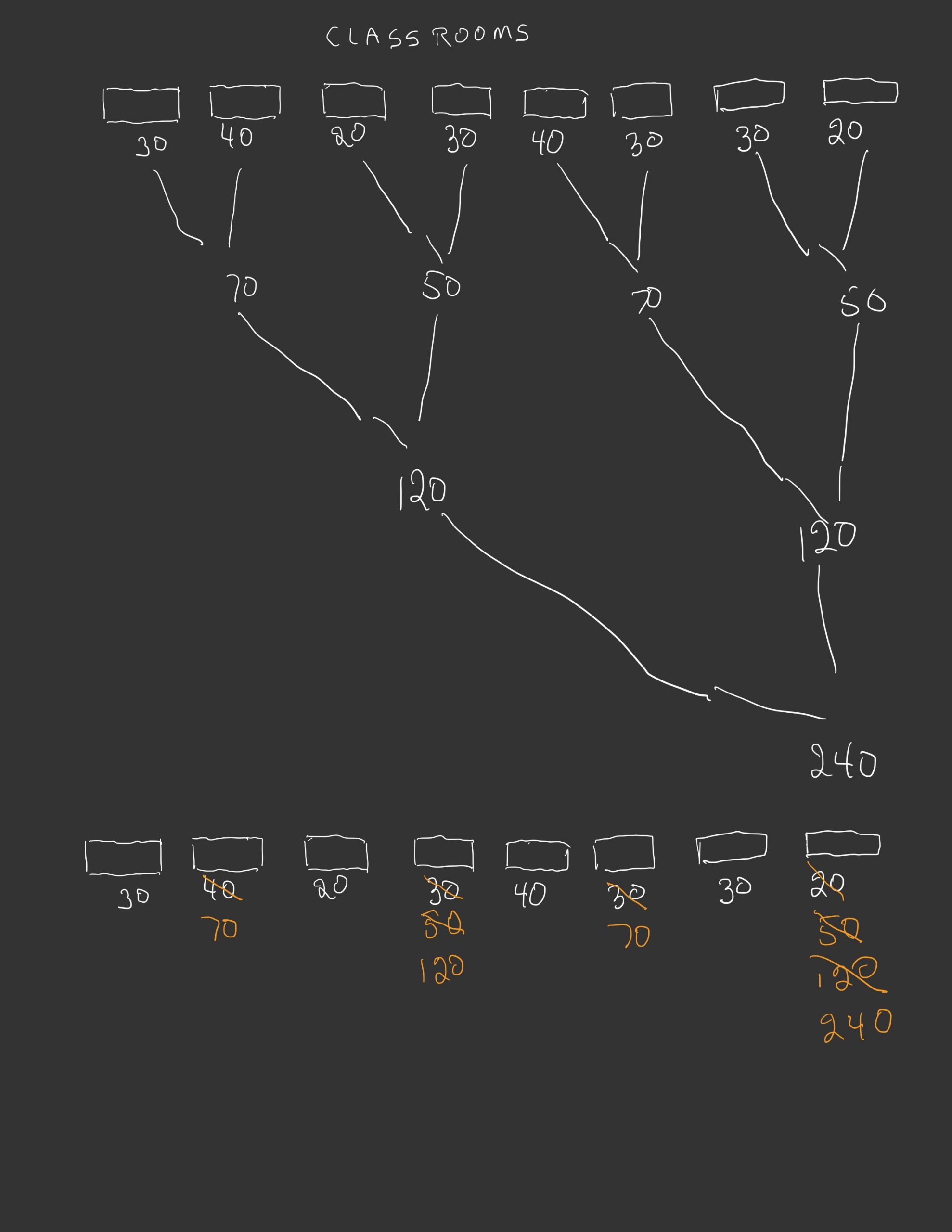 We can operationalize this strategy efficiently in software:

You effectively have a tree of prefixes which you can then use to find the right classroom without visiting all of the classroom counts. You visit a tree with a height that is the logarithm of the number of classrooms. At each level, you may have to decrement a counter.

I have written a Java demonstration of this idea. For simplicity, I assume that the number of classrooms is a power of two, but this limitation could be lifted by doing a bit more work. Instead of N K operations, you can now do only N log K operations.

Importantly, the second approach uses no more memory than the first one. All you need is enough memory to maintain the histogram.

My Java code includes a benchmark.

Update. If you are willing to use batch processing and use a little bit of extra memory, you might be able to do even better in some cases. Go back to the original algorithm. Instead of picking one integer in [0,N), pick C for some number C. Then find out in which room each of these k integers fit, as before, decrementing the counts. If you pick the C integers in sorted order, a simple sequential scan should be enough. For C small compared to N, you can pick the C integers in linear time using effective reservoir sampling. Then you can shuffle the result again using Knuth’s random shuffle, in linear time. So you get to do about N K / C operations. (Credit: Travis Downs and Richard Startin.)

17 thoughts on “Sampling efficiently from groups”