When a program is mostly just accessing memory randomly, a standard cost model is to count the number of distinct random accesses. The general idea is that memory access is much slower than most other computational tasks.

This naive memory-access model is often sensible. However, you should always keep in mind that it is merely a model. A model can fail to predict real performance.

The latest Apple laptop processor, the M1, has apparently a lot of memory-level parallelism. It looks like a single core has about 28 levels of memory parallelism, and possibly more. 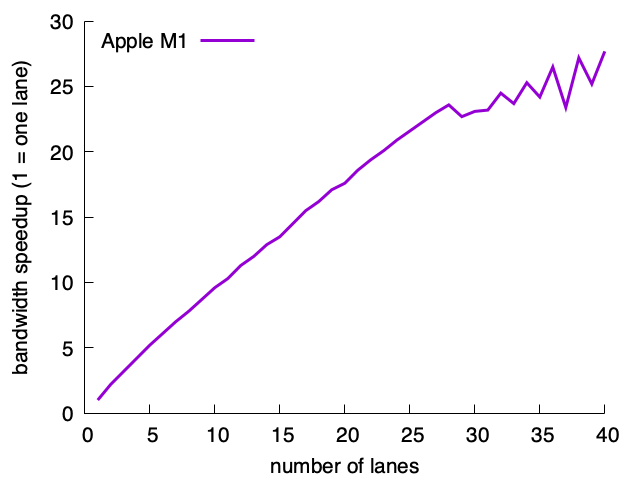 Such a high degree of memory-level parallelism makes it less likely that our naive random-memory model applies.

To test it out, I designed the following benchmark where I compare three functions. The first one just grabs pairs of randomly selected bytes and it computes a bitwise XOR between them before adding them to a counter:

We compare against a 3-wise version of this function:

Our naive memory-access cost model predicts that the second function should be 50% more expensive. However many other models (such as a simple instruction count) would also predict a 50% overhead.

To give our naive memory-access model a run for its money, let us throw in a 2-wise version that also accesses nearby values (with one-byte offset):

Our naive memory-access cost model would predict that first and last function should have about the same running time while the second function should be 50% more expensive.

Let us measure it out. I use a 1GB array and I report the average time spent in nanosecond on each iteration.

At first glance, our naive memory-access model is validated: the 3-wise function is 46% more expensive than the 2-wise function. Yet we should not be surprised because most reasonable models would make such a prediction since in almost every way, the function does 50% more work.

It is more interesting to compare the two 2-wise function… the last one is 40% more expensive than the first 2-wise function. It contradicts our prediction. And so, at least in this instance, our simple memory-access cost model fails us on the Apple M1 processor.

29 thoughts on “Memory access on the Apple M1 processor”