It has been reported that Apple’s mobile processors are competitive (in raw power) with Intel processors. So a natural question is to ask whether Apple’s processors have more or less memory-level parallelism.

The kind of memory-level parallelism I am interested in has to do with out-of-cache memory accesses. Thus I use a 256MB block of memory. This is large enough not to fit into a processor cache. However, because it is so large, we are likely to suffer from a virtual-memory-related fault. This can significantly limit memory-level parallelism if the page sizes are too small. By default on the Linux distributions I use, the pages span 4kB (whether on 64-bit ARM or x64). Empirically, that is too small. Thankfully, it is easy to reconfigure the pages so that they span 2MB or more (“huge pages”). On Apple’s devices, whether it be an iPhone or an iPad Pro, I believe that the pages always span 16kB and that this cannot be easily reconfigured.

Before I continue, let me present the absolute timings (in second) using a single lane (thus no memory-level parallelism). Apple makes two version of its most recent processor, the A12 (in the iPhone) and the A12X (in the iPad Pro).

Another way to look at the problem is to measure the “speedup” due to the memory-level parallelism: we divide the time it takes to traverse the array using 1 lane by the time it takes to do so using X lane. We see that the Intel Skylake processor is limited to about a 10x or 11x speedup whereas the Apple processors go much higher. 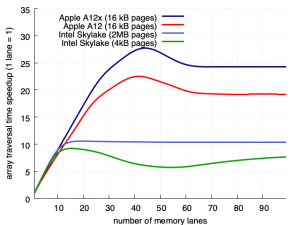 Credit: I owe much of the design of the experiment and C++ code to Travis Downs, with help from Nathan Kurz. The initial mobile app for Apple devices was provided by BenoÃ®t Maison, you can find it on GitHub along with the raw results and a “console” version that runs under macOS and Linux. I owe the A12X numbers to Stuart Carnie and the A12 numbers to Victor Stewart.