Typically, reading decimal numbers and converting them to binary floating-point numbers is slow. How slow? Often on the order of 200 MB/s. So much slower than your disk, if you have a fast disk. A PlayStation 5 has a disk capable of over 5 GB/s in bandwidth.

You can do much better. I finally published a manuscript that explains a better approach: Number Parsing at a Gigabyte per Second. Do not miss the acknowledgements section of the paper: this was joint work with really smart people.

The benchmarks in the paper are mostly based on the C++ library fast_float. The library requires a C++11 standard compliant compiler. It provides functions that closely emulate the standard C++ from_chars functions for float and double types. It is used by Apache Arrow and Yandex ClickHouse. It is also part of the fastest Yaml library in the world. These from_char functions are part of the C++17 standard. To my knowledge, only microsoft implemented it at this point: they are not available in GNU GCC.

On my Apple M1 MacBook, using a realistic data file (canada), we get that fast_float can far exceeds a gigabyte per second, and get close to 1.5 GB/s. The conventional C function (strtod) provided by the default Apple standard library does quite poorly on this benchmark. 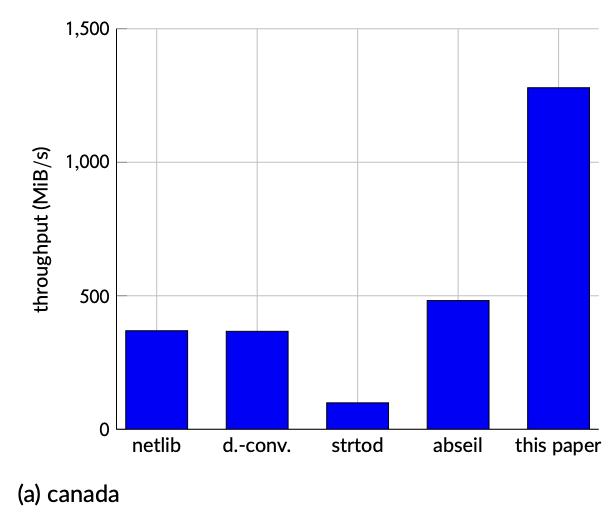 What about other programming languages?

A simplified version of the approach is now part of the Go standard library, thanks to Nigel Tao and other great engineers. It accelerated Go processing while helping to provide exact parsing. Nigel Tao has a nice post entitled The Eisel-Lemire ParseNumberF64 Algorithm.

What about Rust? There is a Rust port. Unsurprisingly, the Rust version is a match for the C++ version, speed-wise. Here are the results using the same file and the same processor (Apple M1):

There is an R binding as well, with the same great results:

On our machine, fast_float comes out as just over 3 times as fast as the next best alternative (and this counts the function calls and all, so pure parsing speed is still a little bettter).

A C# port is in progress and preliminary results suggest we can beat the standard library by a healthy margin. I am hoping to get a Swift and Java port going this year (help and initiative are invited).

12 thoughts on “Number Parsing at a Gigabyte per Second”